Brandon From No Quarter

From No Quarter Paranormal 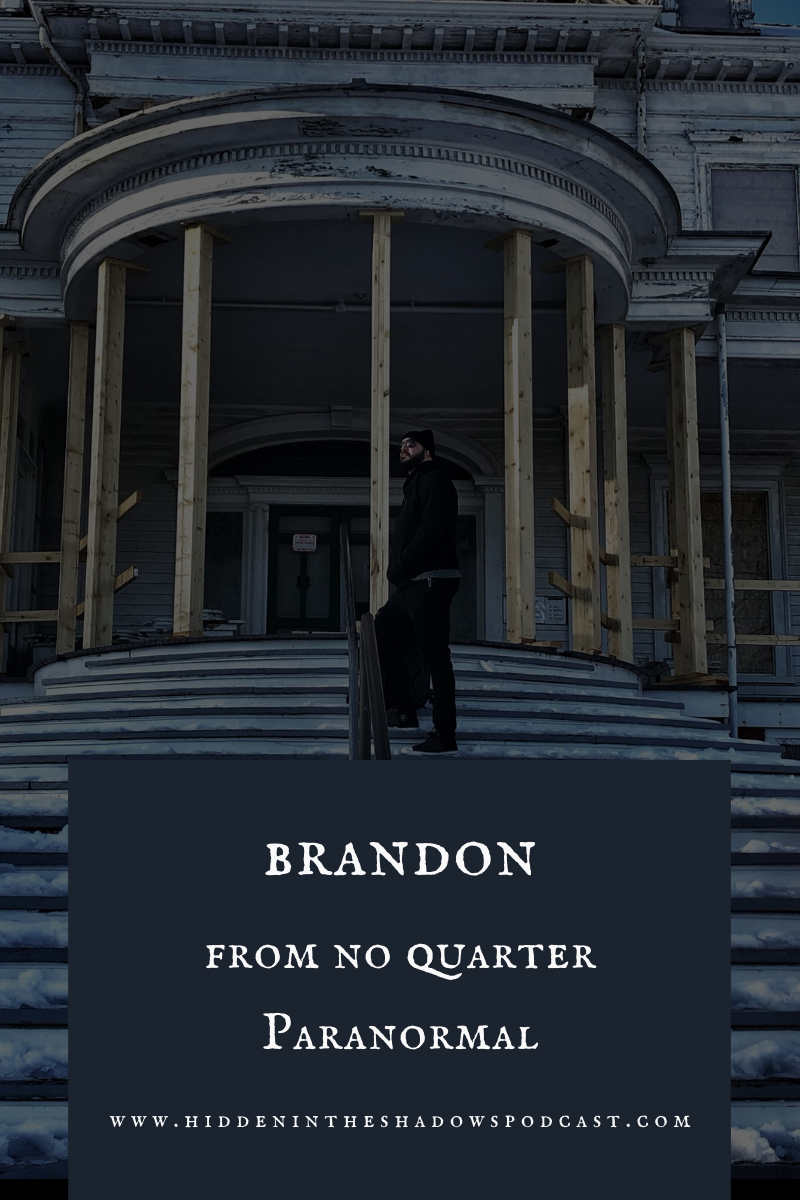 Welcome to the blog of the paranormal podcast Hidden In The Shadows. The podcast where we talk about everything hidden in the shadows while throwing in our own experiences and theories behind certain subjects. This has become and basically is the extension of the podcast in blog form. You can find more in-depth conversations about specific paranormal subjects and what we are up to at Hidden In The Shadows. On this special post, we are diving in deep about a very special paranormal guest, Brandon from No Quarter Paranormal. No Quarter Paranormal is a paranormal investigation team out of eastern North Carolina around the Swansboro area. We interviewed Brandon on an all-new bonus episode that came out on Wednesday, March 17th. The bonus episode featured a bit about No Quarter Paranormal, Brandon’s experiences currently with the paranormal, the future of No Quarter and future investigations, and lastly what has shaped Brandon’s interest in the paranormal. So this blog post is an extension of that and a brief overview of Brandon and his paranormal world. 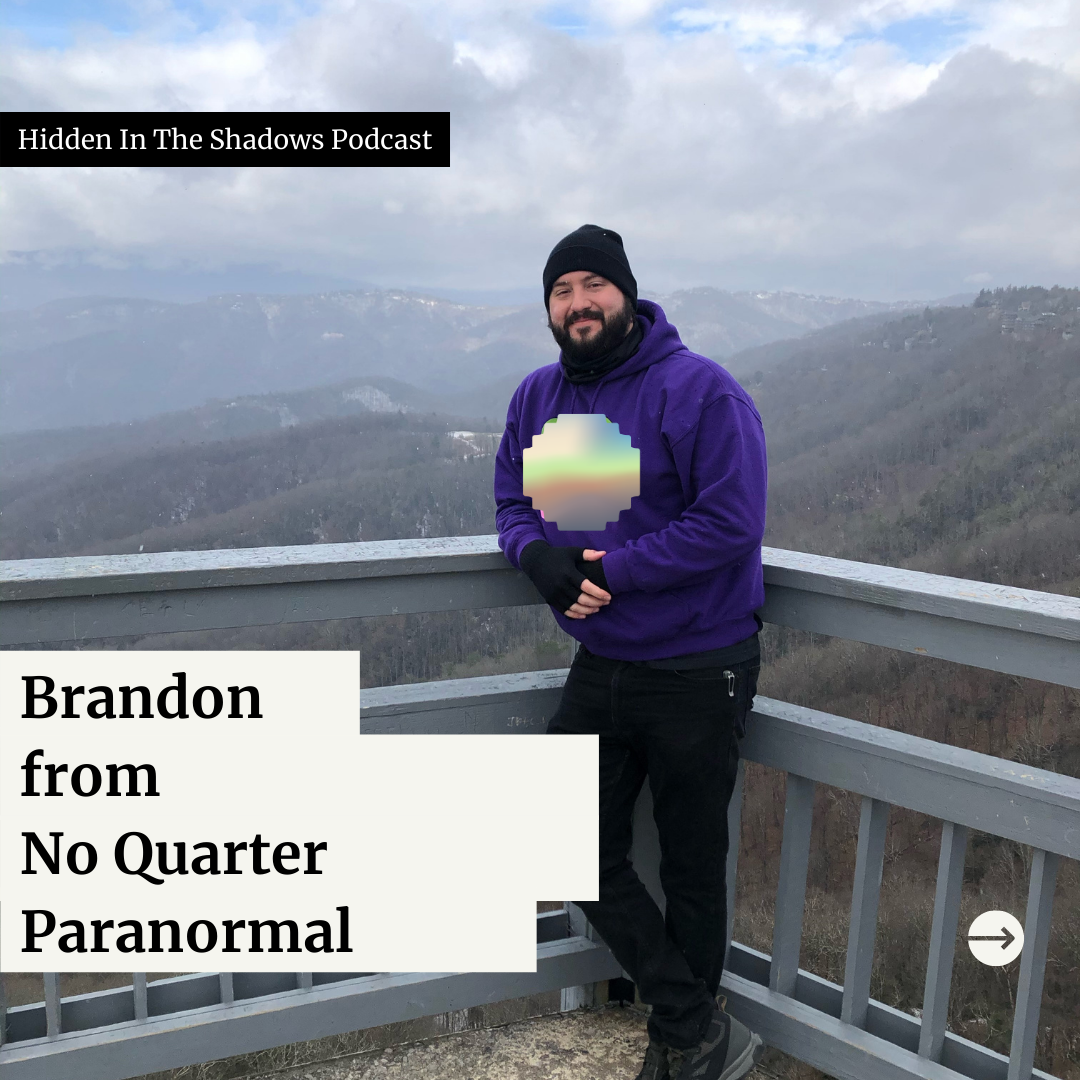 Back To The Beginning.

Brandon is the co-founder and lead investigator for No Quarter Paranormal. Their main motto is to Bring Hope, Get Evidence, and Giving Closure. With that being said Brandon’s experience with the paranormal goes way back.

Everyone seems to have that moment that sparked their peak into the paranormal world. I had one, Isaac has had one, in fact, everyone on the team has had one. They’ve happened at different age points in our life but Brandon’s happened when he was fairly young.

“ My journey into the paranormal and how it technically found me started when I was 8 years old on a school trip to the USS North Carolina Battleship in Wilmington, North Carolina. Being defiant and stubborn as I was, I snuck away from the group to find a bathroom on the 2nd level and had one of the crank metal doors turn and slam next to me, and had a guy in an older naval looking outfit walk by me right after and turn down the hallway. Thinking he was just scaring me and pulling a prank, I asked the tour guide about the guy after being scolded by my teachers and chaperones. They claimed there’s no reenactment people or current navy members on the ship that day.”

That incident sparked an extreme interest in Brandon’s intrigue for the paranormal it was that day when he knew “life might be different moving forward than others.”  From that experience, he knew something greater was happening, something more intense and that's when he started being intrigued by the paranormal. 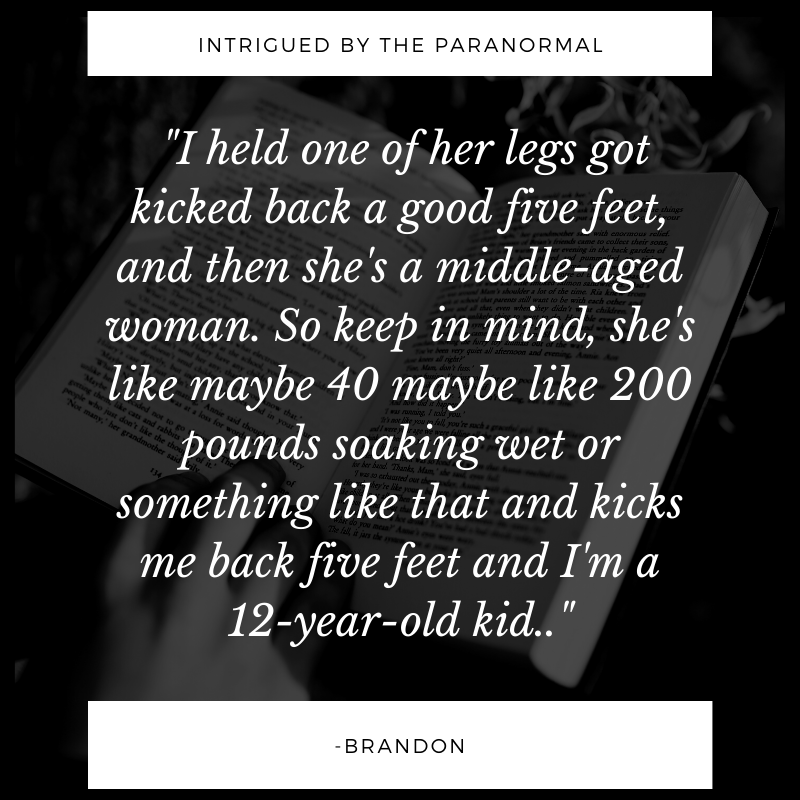 The Moment Of Intensity

So everyone always has that moment of “Oh geez the paranormal is real” and then that moment where the paranormal experience is so intense it has no choice but to take it to the next level. Fast forward a couple of years to Brandon being at the age of 12. His experience with a member from his family’s church completely changed his viewpoint going forward.

“So I started there. And then the biggest thing was, I was when I was 12. That means Aaron (Brandon’s youngest brother)  was about nine years old. We were Pentecostal. So they very much believed in the Holy Spirit and speaking in tongues and things like that. It was a Saturday night or something like that. And they're like, hey, this member is not feeling too well and that she's been acting really weird. We're just gonna have some church members go and pray for her. Also, see if she needs anything or something like that. So my mom thought it was normal, hey, let's just go check on the church member. We hopped in the car, and sure enough, she was speaking a different language and her eyes weren’t the same and she started spouting off some pretty crazy, some pretty crazy things. To make it short, it turned into an exorcism. So there's a lot of elders in our church now, a lot of young bucks basically around that could hold her while the pastor was trying to perform the exorcism. So I held one of her legs and got kicked back a good five feet, and she's a middle-aged woman. So keep in mind, she's like maybe 40 maybe like 200 pounds soaking wet or something like that and she kicked me back five feet and I'm a 12-year-old kid that's growing in you know, decent size. So then, of course, she looked at me with black eyes and I was like, okay, so there are a light and a dark side. So I learned very quickly that there might be such a thing as heaven to hell. And I know, we've had many discussions of how that interprets into nowadays and things like that.”

So with that being said, Brandon before the age of 15 experienced his first paranormal experience as well as one of the more intense situations that led him into the thinking of “Oh wow there’s good and there’s the bad.” Which eventually led him into the work he does now with the paranormal team No Quarter.

Bring Past Experiences To The Present

Brandon’s mindset has always been to build a team with like-minded talented people on the same mission and goal as him. And that is with light in their hearts to find evidence, give hope to people and spirits and ultimately give closure whether that by preserving the history of a location, finding and giving a voice to spirits even in the afterlife, confirming research and evidence, and ultimately bringing closure. The No Quarter Paranormal team is a steadfast group of people looking to bring that motto and proof of the paranormal to the forefront. While the investigations are local at the moment, they are not afraid to adventure beyond the confines of North Carolina and if anybody reading this needs help with their paranormal situation don’t be afraid to reach out. 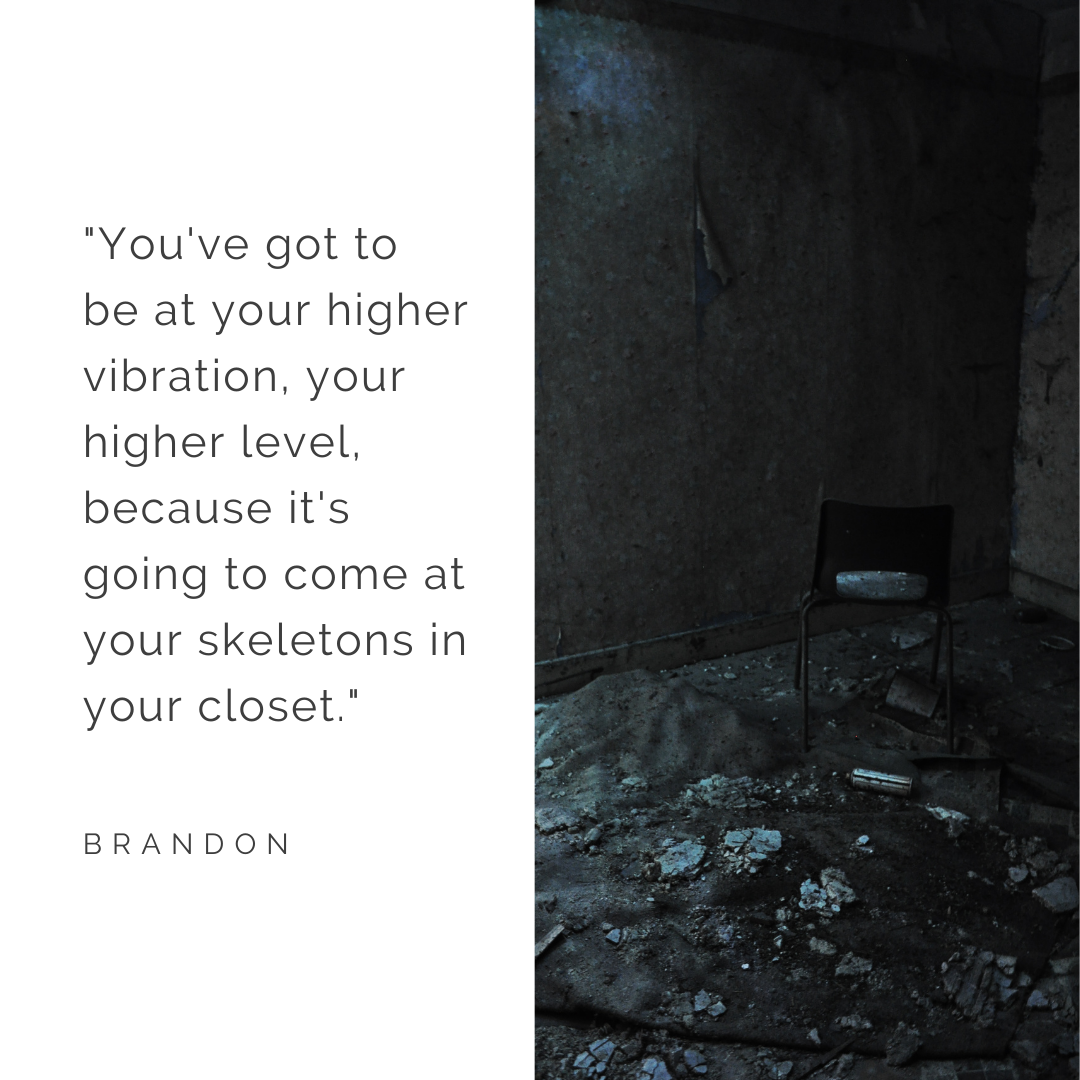 The Most Intense Cases

“Just to see the change in atmosphere and just to really feel the electronic charge that you feel when you go across someone's house. And then I can't explain that it's like a barrier. And when you cross that barrier it feels like hopelessness and distraught. Depression, like all the stuff that you don't want to deal with whether you dealt with anxiety like I have in the past, or depression, or just dark times, or anything like that. But just the change, just to see the people oppressed and knowing you got to get rid of that bad boy. So it's just one of those things where those are probably the most intense I've seen. Like I said, stuff like weird vomit coming out of people that doesn’t make sense like black, weird stuff. I've seen stuff thrown, I've seen stuff levitate, I've seen eyes changed to black, I've seen stuff and mirrors crack but you name it as far as demonic can't, it gets intense. And you have to go in with the mindset and the intent that you're going to vanquish what's there and get rid of it and take it off the plane. Because if not, is going to come at you. The thing is you have to be on your A-game because you have to be meditated, prayed up whatever that you believe in, you got to be at your higher vibration, your higher level, because it's going to come at your skeletons in your closet that is really just going to throw stuff at you, to divert you from trying to get rid of it. So the goal is to come in with your best foot forward. And to not try to show fear because it feeds off that fear. So I'd say that the most intense ones are probably some of the demonic cases.”

The Future And A Special Thanks To Brandon

With that being said Brandon is bringing his own experiences as well as the experiences from the other members of the team to understand more of the paranormal world, proving its existence and conquering the darker entities that try to take over people’s lives. The paranormal is something that is a big part of Brandon’s life and probably always will be. He’s bringing the light in a tunnel that at times can be very dark. We can’t wait to see what the future holds for the team and for Brandon as the co-founder and lead investigator. Make sure to follow them on their journey on their social media accounts listed below and stay tuned for future evidence and information. And if you are someone that is experiencing the worst side of the paranormal don’t hesitate to reach out.

Special thanks to Brandon for coming on. We loved having him on a bonus episode! Stay tuned for a catch-up blog post later in the future catching up with Brandon and the team! 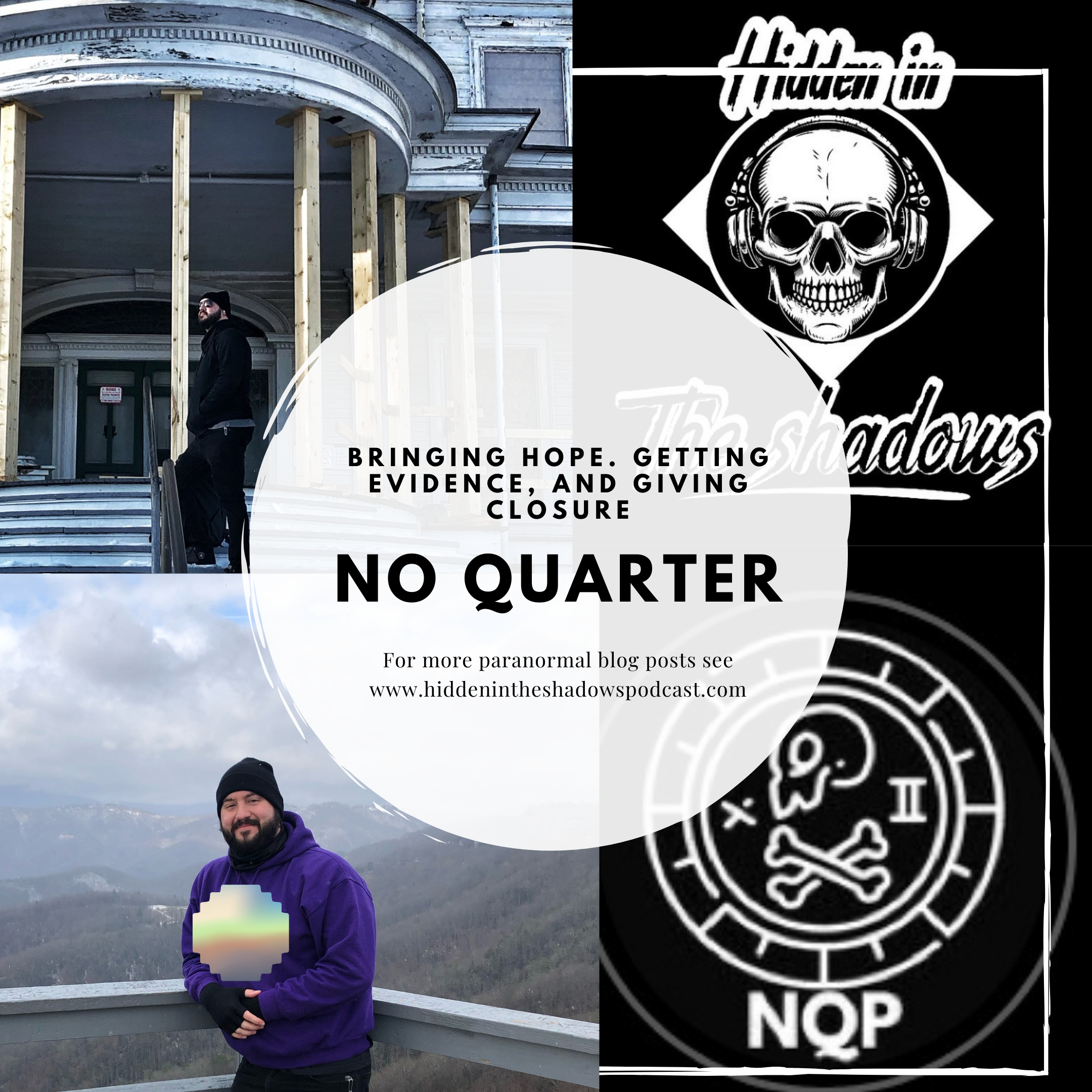 Where to get ahold of Brandon and The Paranormal Team.

Feel free to message them on any of their social media platforms below.

Find out more about the No Quarter Paranormal team in the next blog post! 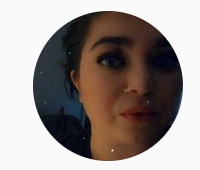 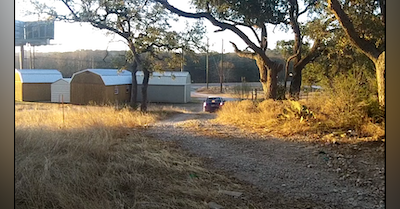 Everyone has that one place. A place where you may have experienced the most activity or the most intense encounter with the paranormal. This location w…

Hidden In The Shadows Podcast was named a top New Orleans haunted house expert by Redfin. Check out the article they were featured in. Link to blog post …